Despite the fact that Cryptocurrencies are protected by solid and complicated encryption mechanisms, thanks to the underlying blockchain technology, the current state of the digital realm have vulnerabilities. Blockchain is yet to be widely adopted, and centralized servers, which house nearly everything we interact with on the internet, are vulnerable to cyberattacks such as DDoS. This is perhaps the most prevalent type of cyber attack used by hackers.

A more serious concern is demonstrated by a large number of successful DDoS attacks on Crypto exchanges and other Crypto sites.

For Cryptocurrencies to gain broad adoption, they must be trustworthy. Consumers want assurance that they will be able to access their funds and conduct transactions with the same convenience and confidence they have when dealing with a bank. If exchanges and similar websites have been subjected to DDoS attacks, consumers may justifiably be concerned about the industry’s structural integrity.

So what is a DDoS attack, and why is it a serious issue?

A distributed denial-of-service (DDoS) attack is a malicious attempt to interrupt a server’s, service’s, or network’s regular traffic by overloading the target or its surrounding infrastructure with internet traffic. This is frequently accomplished by deploying networks (botnets) of malware-infected devices (bots), therefore putting them under the control of the bad actor.

DDoS attacks are carried out using networks of computers that are linked to the Internet. These networks consist of compromised PCs and other devices (such as IoT devices) that an attacker may remotely control. Individual devices such as this are referred to as bots (or zombies), and a collection of bots is referred to as a botnet. After establishing a botnet, the attacker may lead an attack by sending remote commands to each bot. 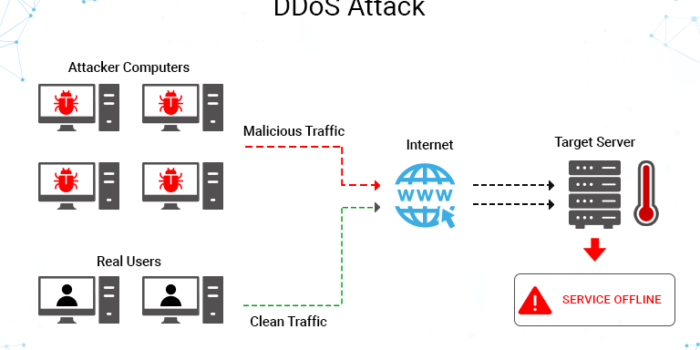 After targeting a victim’s server or network, each bot sends requests to the IP address, possibly overloading the server or network and creating a denial-of-service. Since every bot is a legal internet device, it may be difficult to separate attack activity from routine traffic.

Can you identify a DDoS attack?

One of the first indications of a DDoS attack is a website or service becoming significantly slow or unresponsive. However, more research may be necessary since many possible explanations  – such as an actual increase in traffic, might produce comparable performance issues.

However, some common symptoms one could keep an eye out for include:

DDoS attacks have been launched against currency exchanges, as they have been against other high-profile businesses. Increasing interest and traffic surrounding Cryptocurrencies has created the potential for unscrupulous actors to disrupt Cryptocurrency services, denying Crypto users access.

It’s claimed that cybercriminals are re-profiling botnets so that the Control and Command (C&C) servers may re-purpose infected machines to mine Cryptocurrency instead of launching DDoS attacks since the former is much more stealthy and profitable.

The Theory of Burning in Crypto Tokenomics