Earlier In February, Nigerian Crypto users were outraged after the Central Bank of Nigeria put in place restrictions on Crypto-related transactions for banks within the country. A circular stated that no banks were to facilitate the purchasing or trading of digital currencies and that any individual accounts found to be doing so should be suspended and reported. 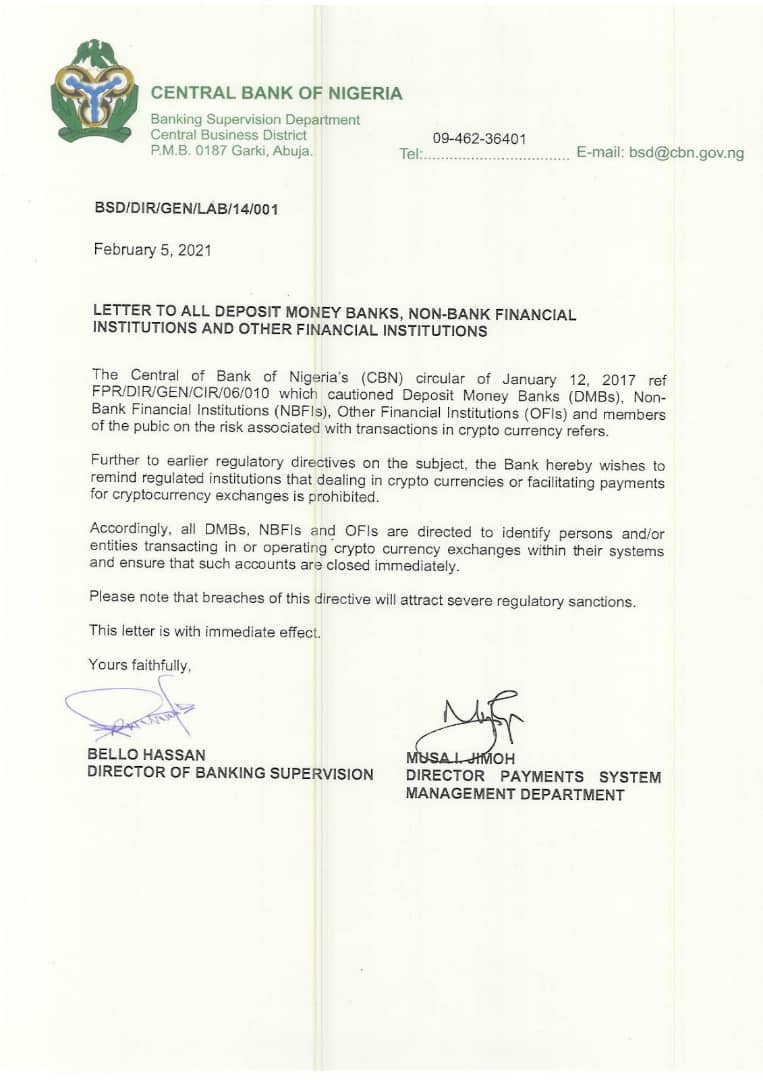 In the weeks after this declaration, exchanges like Binance and Luno put out announcements to their Nigerian users confirming the suspension of withdrawals and deposits of Crypto on their platforms. These developments have led us to question whether any country can actually ban Crypto effectively.

This prohibition came as a surprise to many Nigerian Cryptocurrency users. Cryptocurrency, notably bitcoin, had been on a high note over the last few months preceding the news, reaching a new all-time high of about $60,000, and was seeing more institutional support than ever before. Why, then, would the CBN seek to limit its use, especially given that Nigeria is one of the world’s largest Crypto markets?

Subsequent comments from Nigerian government officials indicated that the government is concerned about the possible use of Cryptocurrency for crime and terrorism. This is a classic rebuttal from Crypto critics who have claimed that the use of Crypto will facilitate criminal activities.

Some Nigerian residents speculated the Crypto ban was intended to prevent future anti-government and anti-police brutality rallies similar to the #EndSARS protests of 2020, which saw protestors’ bank accounts suspended and crowdfunding being conducted using Cryptocurrencies.

While the CBN eventually clarified that its move wasn’t an outright ban, it had still considerably damaged the emerging Crypto economy in the nation.

The never-ending attempts to curb Crypto

Numerous nations have made attempts to limit Cryptocurrency use over the years. Some notable examples include China, which prohibits financial institutions from assisting Cryptocurrency transactions, and Nepal, which has declared Cryptocurrency to be unlawful. In India, the Reserve Bank of India put a ban in place, but this was struck down in 2020.

As bitcoin becomes a more natural and accepted component of the global financial ecosystem, bans and severe limitations on it appear far less plausible.

However, can any country successfully and permanently ban Cryptocurrency?

To put it in simpler terms, the answer is no. Cryptocurrencies are not precisely in the best interests of world governments; as many Crypto experts and entrepreneurs have pointed out, it is not a currency issued by a central bank and cannot be readily controlled by governments. This is why many world governments have been slow to recognize or regulate Cryptocurrencies for an extended period, as their presence poses a danger to their authority.

This is also why efforts to outlaw Cryptocurrency have been tried, although none of them have succeeded in the long run. This is because Cryptocurrency, at its core, allows high privacy levels and is not ‘supervised’ by any significant entity. Besides wallet addresses, which are a combination of numbers and letters, no one can tell where and to whom tokens are being sent.

Because of KYC requirements, Cryptocurrency exchanges are closely monitored by regulatory bodies, but people simply migrate to peer-to-peer trading when exchanges are tied down. For example, in the weeks following the CBN Crypto ban, Nigerians began to trade peer to peer overwhelmingly.
The following infographic from the analytics platform UsefulTulips shows how Bitcoin P2P trading in Nigeria surged by following the introduction of restrictions by the country’s central bank.

In India, a similar scenario was witnessed. Following the RBI’s shadowban on Cryptocurrencies, Crypto aficionados flocked to leading Cryptocurrency exchange WazirX, which developed a peer-to-peer system just two days later, the ban was announced. This completely eliminated the need for financial institutions by connecting sellers and buyers directly.

Meanwhile, citizens in China have been known to utilize VPNs to circumvent government crackdowns.

NFTs – The Future Store of Value?

Polkadot and Its Parachains